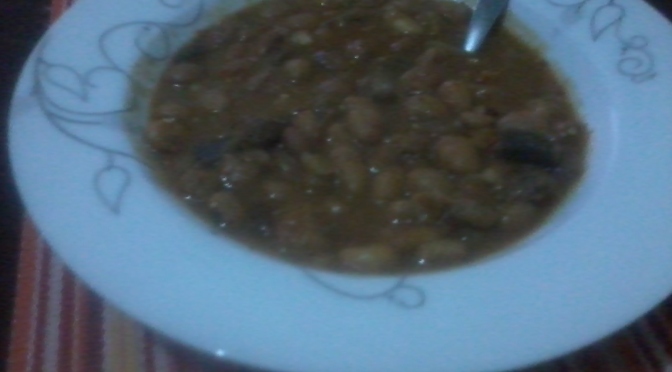 Since I got married I’ve been meaning to buy some beans but i have never gotten around to doing so. Lucky for me,mom in love must have sensed my need because she sent some over and boy were they a lot. Since they were raw, I needed to boil them first. I saw it as an opportunity to use my pressure cooker…not. After fiddling with the manual I realised I wasn’t so confident and silly me, I had never paid attention whenever my mum was using ours at home. So I just resulted in boiling the beans in a plain sufuria. To avoid boiling for so long, first I soaked the beans. If you can soak them overnight.

Anyway, the beans cooked and I even shared some with my lovely neighbour. After cooling I packed them and stored in the freezer. It’s best if you pack in meal size portions, that way you only defrost the amount you need. Back to the beans stew. I decided to prepare a simple stew with minimal spices, we all know I get a little crazy when it gets to spicing food.

In a saucepan saute the onions.

Season with salt and black pepper then add in the tomatoes,eggplant and bell pepper.

Cover and let them cook down. It will take about 8 minutes or so.

Then add the thawed beans. You can also add some little water for the sauce.

Cover and let the beans cook in the sauce. 5-10 minutes is good enough. You just want to get the beans heated up since they are already cooked.

Served this with some cinnamon chapatis.

Delicious. Once in a while it’s good to cook sans the many spices. The bell peppers added the needed kick to the stew.

Are there times you just don’t feel like spicing your food?

One thought on “Beans Stew”

the joys and woes of placing a meal on the table